I’ve had a lot of questions lately, specifically from clients trying to decide when the right time to put on a weight belt is. Obviously, this is going to vary from person to person depending on their strength, ability to maintain core stability and intra-abdominal pressure. Since I have been powerlifting, my strength has increased as well as the amount of weight that I need to belt-up for. I feel like this is a pretty intuitive concept. If you step under a bar to squat some weight, one of two things are going to happen. You will either move the weight well by maintaining your tightness, or you will break down at some point in the lift. This will probably include rounding of the lower back, which will most likely happen on the ascent of the squat. So, if you step under it and say, “Wow, that’s some heavy ass weight! I think I need a belt”, then you probably do.

Now, on the other hand, I have seen a belt do more harm than good on more than one occasion to myself, as well as others. I originally started pulling deadlifts conventionally, but after being a conventional deadlifter for over a year, I decided to change things up for several reasons. One of them being that I had a weak back, another being that every single time I would belt up for a heavy set, it never felt as good with a belt as it did without one. Every time I would lower down to the bar and set up, I would always feel my belt shift, and it would get a lot of slack in it. As a result, my back would almost always round. So, I stopped doing conventional as my main way of deadlifting and switched to sumo. The rest is history. 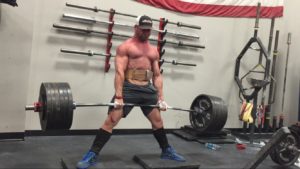 Just about an hour ago, I was helping one of my online clients out in the gym who was having some issues with his deadlift, and he tweaked his back a bit the last two weeks while deadlifting. I happened to be around and available while he was deadlifting, so I let him borrow my eyes. He started warming up with 135, and everything looked solid. His next set was around 165, and he went to put his belt on, which I thought was a little odd. I didn’t say anything at first because I thought that maybe he was just being cautious because of his recent tweaks. He approached the bar for his set up, and I immediately noticed something different. He wasn’t  getting as great of an extension in his back like he was before with the 135, and I knew it couldn’t have been the weight because he only added about 25 to 30 lbs. I asked him when he was finished if it felt different, and he wasn’t really sure. I told him that he wasn’t getting his back set as well as it was without the belt. He took the belt off and went for his next set, and everything looked better than it did with the belt. 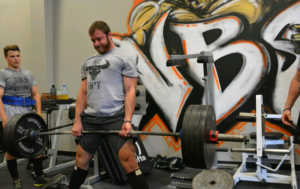 So, all I’m saying is that there is a time to wear a belt, and a time to refrain from using your belt. Those times are going to be up to you to decide when it is appropriate. If you are handling weight with no problems, then you probably don’t need one. If your form is constantly breaking down, and your back is breaking and rounding significantly, then it might be time to belt up. Just make sure that you don’t pull it so tight that you can’t even feel yourself bracing. I’ve seen people do this from time to time that belt up ridiculously tight, and their mentality is that the belt will help to compensate for their lack of ability to properly brace. You may be able to get by for a short period of time, but eventually the weight will win.

I hope this helps some of you in deciding the most appropriate time to put on a weight belt. If you have any questions, comments, or concerns, post them below or feel free to email me at bobby@nbsfitness.net.