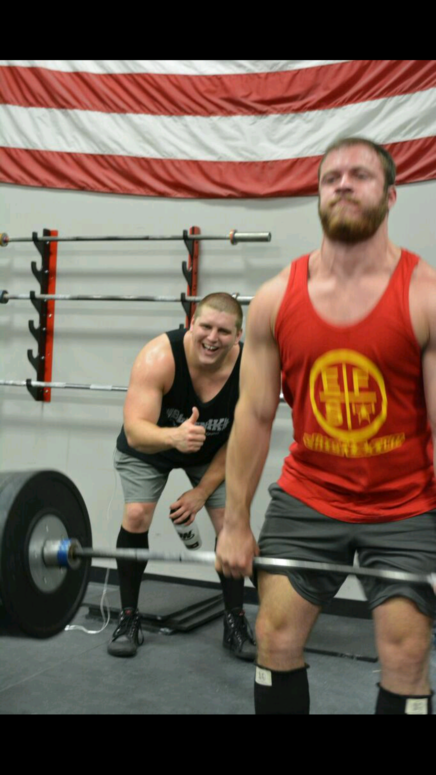 So, I wanted to share more of my struggle that I’ve been having with my training lately in Triphasic. I think it’s great to show my triumphs, and many people do that, but I also want to show some of my fails. We should all know by now that there isn’t any success without failure. I think it’s good for you all to see it, as well as my own clients, so they know that I too face difficulties in my training from time to time. Sometimes you have to fail in order to keep moving foreword.

This first video was actually a pr for me. That is if you want to count a wide stance, spider bar squat to a low box as a pr….lol! If you watch closely, my left foot,(your right, my left) shifts slightly foreword and out of position just a hair after I come up from my first rep. Thanks for the push guys.

Alright, this next video is one of my fails. we were pulling off of about 5 mats I believe. I actually decided to do this beltless because this is not my usual deadlift stance. I am a sumo puller, but we were doing opposite stance in this phase of our training. For some reason when I pull conventional with a belt, it seems to really mess with me and when I get set up at the bottom of the lift, I get a bunch of slack in my belt and it loses it’s tightness. I decided to go beltless at 405 and it felt good, 455 felt good, but then, when I got to 475, well…just watch for yourself. Excuse the language of my teammates…lol!

To be honest, I don’t really know why I missed it. The first two didn’t really feel that bad at all, but when I went of that third, it literally was just not there. After this I threw my belt on and tried it again, but it just didn’t happen. I have watched this video so many times since and found myself laughing almost every time I watched it. I freaking love my teammates and the way they push me and support me. They are a great group of guys and I wouldn’t want to train with any other group. Thanks for the push guys. Just remember that it’s okay to fail. Learn from your mistakes and move on. Every training day is an opportunity to start fresh and forget about the bad training day you had two days ago. Get it out of your mind, and SFW!