We are a bit non-traditional for Thanksgiving, each year we decide on a new adventure, so this year we decided to go camping. On Wednesday, we rented an RV, packed up our pups, our son and his pup, and settled in for a four hour drive as we headed to Edgar Evins State Park in middle Tennessee.  It’s been a long time since Steve and I have been camping….and yes, we consider staying in an RV, camping!

We actually started out tent camping about 20 years ago. Our family vacations were spent in Arkansas and Tennessee State Parks. Our kids best memories are of us sitting around a campfire roasting marshmallows and watching “caveman TV”. We eventually traded in the tent for a camper but when the kids got into high school they didn’t really want to go anymore so we sold it. Fast forward to today, our camping adventures will forevermore be more luxury camping.

With nearly 400 pounds of dogs in tow, we headed east. Woody decided he needed to ride shotgun but the other two were definitely ready to take his seat! Of course, it wasn’t safe for them to be up front so after a few minutes they had to move on back. 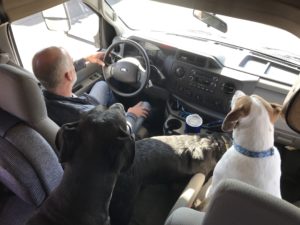 We made a pit stop about half way. With dogs on leashes we headed for a potty break on the grassy knoll. Now, I know my dogs are unruly when it comes to walking on a leash but when Rex and Woody decided to cut into a full run to catch up with Oliver I almost ate the grassy knoll. Cody, laughing uncontrollably, was absolutely no help! I realized just how much power my big Rottie has! We need leash lessons!

It’s been a while since we’ve all just done nothing, and was ok with it. Once we got camp set up (literally took 10 minutes) thats what we all started trying to do…nothing. We are being stimulated by cell phones, tv, computers, 24-7. Shutting that off takes a bit of time.

There are no artificial lights when you’re at a campground. When the sun goes down, the night sky fills with blackness quickly. Since I had gotten up at 4:15 Wednesday morning, by sundown I was ready for bed. I turned in and the guys weren’t far behind. We all slept 11 hours that night. Some of the best sleep I’ve had in awhile!

After a quick breakfast Thanksgiving morning we headed out on a trail hike with the dogs. More like a trail drag really… After a couple of hours in the woods with those beasts, we were ready for a nap! I can get used to this nothingness thing. 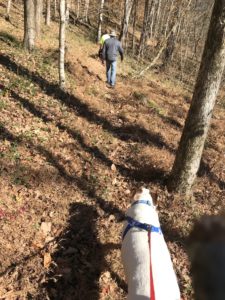 For Thanksgiving dinner we grilled steaks, had homemade mac and cheese and we tried out a butternut squash casserole I picked up at Costco. I usually make one but I thought we’d try this one out…don’t get it, it’s a fail. However, with smores for desert, the dinner was quickly redeemed. 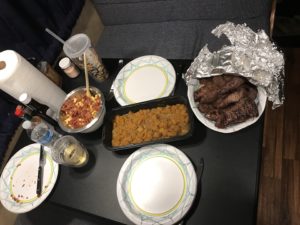 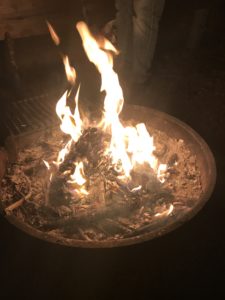 It was nice spending some time with my husband and my son away from home and work. I don’t get much time with Cody, he’s like most 24 year olds, doing his own thing. The three of us had really good conversations and shared some good laughs.  Cody suggested we make camping our new Thanksgiving tradition, I think he may be on to something.