While scrolling through Facebook this morning and thinking about what I wanted to blog about, I couldn’t help noticing the consistency in disdane for Trump/Clinton up and down my newsfeed. It’s nothing new, its been that way for over a year. Pictures of newborn babies and my friends out having a good time have been replaced by Clinton memes and Trump protesters. Funny cat videos have been replaced by photos of men and women conceived through rape who went on to be famous. Everyone is trying to make their point about something. To prove their favorite candidate is better, often by tearing the other candidate down. I don’t have to paint the picture further, your Facebook feed looks the same as mine.

There are certain issues I feel strongly about, but for the most part I keep my opinions to myself unless someone asks me how I feel about a particular issue. We won’t really go into any of that here, as that would make my blog no better than my newsfeed and that’s not my point.

Regarding my point, lets get to it. This week our country will select a new president. We will have a new leader of our free world, a new head of state. The campaign reteroick will be over (thank God) and the new commander in chief will prepare to take his/her seat on January 20th. Some will be happy, some will be pissed but what we all will be is….in it together.  We will all share in a choice. Regardless of who wins the presidency, we get to choose whether we will unite as a country or continue to divide ourselves. Choosing to support the new resident of the Oval Office doesn’t necessarily mean you agree with their platform or that you’ve switched teams, it simply means you have chosen to respect the position. I think, as a nation, we have lost repect for our government in many ways, and that disrespect continues to divide us.

We live in an awesome country and we have so many freedoms that we take for granted every day! The fact that we can even exercise our right to vote is a freedom that not everyone shares! Imagine living in a dictatorship!

Now, we have had some great presidents and we’ve had some terrible presidents too! It’s fair to assume the next four years will fall somewhere in between. One fact remains for me however, I love my country and although I don’t always agree with some of the decisions made (as well as getting down right embarassed at times), I will always stand with my hand proudly over my heart every time the National Anthem is played or our beautiful flag is flown. At the very sound of the Star Spangeled Banner, my eyes well up with tears and my heart fills with pride. Regardless of our choice of presidency, I will still stand with my country and I challenge you to do the same.  Be proud of who we are, stand together. 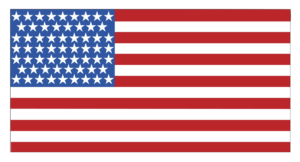