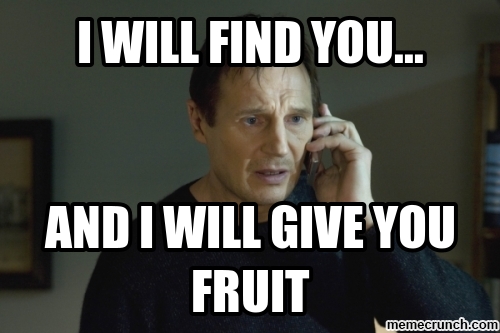 Fructose is the sweetest of all-natural sugars. It is somewhat special compared to other sugars. It has its own GLUT transporter which is cool and could potentially make fructose a better option as a carb source, by lowering the total amount of insulin secreted due to specific glucose transporters. Fruit could be a better carbohydrate choice with humans with diabetes as well (pre, type-1, and type 2). First, we need to understand the GLUT transporters and insulin.

There are 14 different GLUT proteins. Gluts 1-5 are the most studied.

Glut 1– Insulin-Independent, found on the blood, blood brain barrier, and heart. They are the major GLUT expressed in brain endothelial cells. They are also expressed in brain astrocytes, fueling neurons. It has a high affinity for glucose and is insulin-independent. GLUT 1 has a low Km. These transport glucose even when circulating levels are low.

Glut 2– Insulin-Independent, found in liver, pancreas, and small intestine. These glut 2 have a high Km and they have a low affinity for glucose. These Gluts maximally uptake glucose when glucose concentrations are high. Glut2 signals to the beat cells in the pancreas that blood glucose concentrations are high, and the beta cells respond by secreting insulin in the bloodstream. This is the second major fructose transporter. When insulin levels get very high, GLUT2 will translocate from the apical membrane back to intracellular vesicles, letting GLUT4 take most of the workload.

Glut 3– Insulin-Independent, found in the brain, neurons, and sperm. Low Km, which means they have a very high affinity for glucose, so they have priority taking up glucose, compared with other gluts that have a lower affinity.

Glut 4– Insulin-dependent, found in skeletal muscle, adipose tissue, and heart. Insulin triggers the translocation of glut 4 into the cell membranes of these tissues to uptake glucose. These have a moderate Km, and moderate affinity for glucose This glut transporter is affected with people with diabetes. In type 2 diabetes, insulin cannot bind to the insulin receptors efficiently, and glut 4 will not translocate to the cell membrane, despite a large concentration of glucose in the blood. Blood glucose will remain high, and glut 4 will not translocate to cell membranes to lower blood glucose. Exercise can also stimulate GLUT4 translocation to the plasma membrane in skeletal muscle, but this pathway is not initiated by insulin.

Glut 5– Insulin-Independent, found on the Luminal side of intestinal epithelium, kidney, sperm, skeletal muscle, fat tissue, and brain.  These GLUTs are the primary fructose transporters. Once GLUT5 and GLUT2 transports fructose across the apical membrane, GLUT2 helps transports the fructose across the basolateral membrane. Insulin will cause an increase in GLUT5 translocation; however, it is not insulin-dependent.

Insulin is secreted by beta cells in the pancreas. After you ingest a meal, particularly one rich in carbohydrates, your blood glucose will raise. We learned above, GLUT2 acts as a glucose sensor, and once glucose concentrations get high, GLUT2 will signal to the beta cells in the pancreas to release insulin. Once insulin is secreted, insulin will bind to insulin receptors, which are in skeletal muscle, adipose tissue, liver, and other tissues. When insulin binds to that receptor, it will cause a cascade of signals, which eventually leads to the translocation of GLUT4 from their storage vesicles, to the cell membrane, where it binds and begins to uptake glucose from the bloodstream into the cell. This will lower blood glucose by dramatically increasing the rate that glucose can be taken up by cells, because of the increased number of glucose transports. Insulin is a storage hormone. It stimulates the uptake of glucose, which increases glycogen synthesis, and decreases glycogenolysis. Insulin also increases amino acid uptake, which leads to increased protein synthesis in muscle, adipose, and organ tissue which decreases the rate of protein degradation. Insulin increases the uptake of triglycerides from blood into adipose and muscle tissue. Fatty acid and triacylglycerol synthesis is increased, and the rate of lipolysis (breakdown of fat) is decreased. If we want to lose fat, a good idea is to have low insulin levels. The lower number of cells that insulin is bound to, the more cells can breakdown, and burn fat. If a cell has insulin bound to it, that cell will not breakdown, and instead it will uptake nutrients. If that same cell is not bound by insulin, it may be catabolized for energy. The more fat cells that aren’t bound by insulin, the more fat cells they can breakdown to provide energy. Lowering carbohydrates is an effective way of burning fat, by lowering the amount of insulin secreted. We also must remember that during a meal time, we are hypercaloric. You can eat 500 calories in the matter of 15 minutes, and that meal will last you hours until your next one. Since you will be hypercaloric during the time around the meal, insulin really matters here. A huge spike of insulin, combined with a hypercaloric meal, will hinder fat breakdown, and you will begin to store fat. A lower and more steady insulin concentration will ensure that the least amount of fat will be put on as possible. Below I put 2 charts I found from google to help illustrate this cycle. At the end of the day, if you are in a caloric surplus, you will store calories, and if you are in a caloric deficit, you will burn stored calories. If you are in a caloric surplus with very high amounts of insulin, you will be in a good environment for muscle gain, but also for gaining fat. If we can take in the same amount of total kcal but have less dramatic blood sugar spikes when we eat, this will lead to a better chance for the surplus of calories to be taken up and stored as glycogen, or to fuel MPS, while lowering the total amount of fat that is stored.

After studying GLUT transporters, I hypothesized that since GLUT5 is insulin-independent, and is the main carrier of fructose, followed by GLUT2 which is also independent of insulin, that eating fruit as a carbohydrate source might be beneficial for burning fat, by reducing the lower amount of the storage hormone, insulin in the blood. Once I had that thought, I started thinking about people with diseases such as diabetes type 1 and 2. I went on PubMed and found a few different articles that were interesting, and I wanted to share.

There was a group that wrote a paper on PubMed that hypothesized that meals high in fructose would result in lower leptin concentrations than meals containing the same amount of glucose, since leptin secretion is regulated by insulin-mediated glucose metabolism. In the study, they collected blood samples every 30 min for 24 hours from 12 women on 2 randomized days, where the subjects consumed 3 isocaloric meals consisting of 55, 30, and 15% of total kcal from protein, carbohydrate, and fat, with 30% of kcal coming from either fructose or glucose as a carbohydrate source. Insulin responses were 65%(+/-5%) lower during the Fructose containing meal compared to the glucose containing meal. They also concluded in their study that the fructose containing meal produced a less pronounced suppression of ghrelin, compared to the glucose containing meal. This study is incredibly fascinating. We know that even though the subjects received the same kcal and % of macronutrients, the group that had fructose as a carbohydrate source instead of glucose had roughly a 65% decrease in insulin. This means that even with 2 identical meals, you can improve body composition by just changing carbohydrates to fructose. Lower insulin will get secreted with a fructose containing meal, which as we learned above in the insulin paragraph, will lead to the potential for more fat cells to be catabolized as energy. The lower secretion of insulin will lower the amount of fat stored, and the calories will have the potential to be stored more as glycogen, and muscle protein synthesis. The study also concluded that the fructose containing meal produced a LESS pronounced suppression to ghrelin vs. the glucose containing meal, indicating that eating a fructose meal won’t have you feeling as satiated compared to the glucose meal.

Another publication, which was a meta-analysis, identified 53 eligible randomized controlled trials with 1,126 participants, out of 3,666 citations. In diabetic participants, fructose reduced 2-hour blood glucose concentrations by 4.81 mmol/L compared to glucose.

Another publication studied the evidence for postprandial glycemic and insulinemic responses after replacing either glucose or sucrose in foods or beverage with fructose. They found that replacing glucose and sucrose with fructose resulted in significantly lower peak postprandial blood glucose, particularly in people with prediabetes, type 1, and type 2. Similar results were obtained for insulin.

GLUTs and insulin resistance and diabetes

Rats with type 2 diabetes had a dramatic increase in GLUT5 mRNA and protein levels in the kidneys.

Rats with diabetes had a 2-3-fold increase in GLUT5 mRNA and protein levels in adipose tissue.

Humans with diabetes had a dramatic increase of GLUT5 mRNA and protein levels in skeletal tissue.

In insulin resistant individuals, or those with type 2 diabetes, GLUT2 will REMAIN in the apical membrane so that it can continue absorbing glucose. GLUT5 has a dramatic increase in skeletal tissue. Just thinking about this, it makes since to me. If you are more resistant to insulin and cannot rely on GLUT4 to lower blood glucose, having more GLUT5 proteins available to take up glucose would make since, as also would keeping GLUT2 in the apical membrane despite high insulin levels, since insulin will not bind efficiently, causing GLUT4 to remain in their storage vesicles. GLUT2&5 are the two main fructose transporters. Both transporters are insulin-independent and are capable of lowering blood glucose. Increased GLUT2 and GLUT5 proteins could possibly make fructose a great option as a carbohydrate source, if carbohydrates are present in the diet, because both of these proteins will be upregulated, they are insulin independent, and are the main fructose transporters.

In conclusion, eating fruit/ fructose as a carbohydrate source could be a good idea for anyone trying to lower their body fat and improve their body composition, or trying to manage diseases such as diabetes. You can improve body composition and burn even more fat by incorporating fructose for the carbohydrate source, by taking advantage of the glucose carriers responsible for fructose, GLUT5 being insulin-independent the main fructose transporter, followed by GLUT2 which is also insulin-independent. Lower and more stable insulin levels will lead to less total bodyfat stored, and those calories will have a higher propensity to be stored as glycogen or more muscle protein synthesis. The article that concluded that the fructose containing meal produced a less pronounced suppression of ghrelin, compared to the glucose containing meal is very interesting as well. This could be beneficial for those who struggle to get their meals down and don’t have a high appetite. Choosing fructose as a carbohydrate source will not suppress ghrelin as much as glucose, so fructose meals won’t satisfy hunger hormones quite as well as other carbohydrate sources will. If you struggle getting hungry and have a small appetite, try opting for fructose. Those who have type 2 diabetes or insulin resistance will have an upregulation of GLUT2 and GLUT5, which are both insulin independent and are main fructose transporters. Opting for fructose as a carbohydrate source will elicit a lower insulin secretion, and since the GLUT2&5 proteins are upregulated, this could lead to more efficient uptake of fructose. Shout out to my nutrition coach, Justin Harris for proofreading and giving me advice on where to go with this article. Also, I’d like to give a shout out to Dr. Freeman at the biology department at UofM for taking the time to read through this and giving me his input.