Recently, during one of my what seems like forever 30 minute steady state cardio sessions, I was listening to a podcast and somehow thought of a new idea for some blogging. I’m still trying to get this whole blogging thing down, and I know that it is meant to be a little more about myself, and give a glimpse into my personal life, so I’m going to start doing weekly movie picks. I don’t really know what it is, but ever since I was young, I have really been into movies. There isn’t any particular genre that I prefer, if its a good movie, then I’m all for it.

So, without further adu, my first movie pick of this weekly series is Mad Max. It was originally released in 1979, a little before my time, but you will come to find that many of the movies I like were before I was around. This movie takes place in a dystopian future when oil resources have been depleted, and the world falls into war, famine, and financial chaos. The movie takes place in Australia where a cruel biker gang is out of control and the last line of defense is an Australian law force. Mad Max, (played by Mel Gibson) wants vengeance on this gang when his wife and son are hunted down and murdered after he kills the leader of the gang, known as the night rider, leaving him bloodthirsty for revenge. 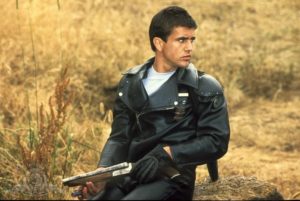 This film is the first installment of a trilogy that is followed by Mad Max 2, The Road Warrior, and Mad Max, Beyond Thunderdome. I highly recommend the both of these if you enjoy the first one.

Here is the original trailer for the 1979 film.