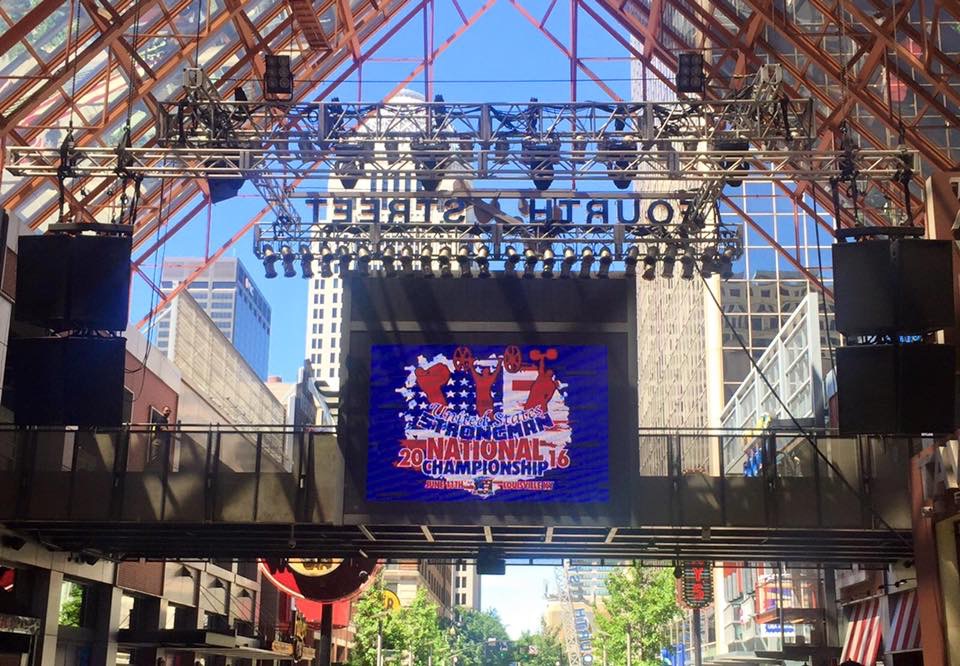 As the big highlight of my summer so far, I was able to help once again with United States Strongman’s National Championships in Louisville, KY. This year I was unable to treat at the event due to the Kentucky Chiropractic laws not allowing the purchase of temporary licenses from chiropractors licensed outside of Kentucky. Instead I was brought on as one of the judges of the event as I am a state rep for United States Strongman. First of all, If you have never promoted a show, you should know that no matter what you do and how much you plan, there will be hiccups. There was no exception to this show, but within the duration of the first two events things were running smoothly (who’d have thought organizing and ordering 314 competitors over two events using 8 total lanes would be a bit of challenge?).

As with working any event, whether as the promoter, MC, judge, or providing athlete care, you are going to be the busiest people at the show. 4th Street Live was easily one of the most impressive venues I have been involved with in strongman and is the one regret I have from the weekend as I was unable to explore and experience it throughout the day. I did have some opportunities to sit back and take in the venue, and it was just so impressive to me how many spectators were packed into the place to watch. Although strongman athletes usually bring a built in amount of spectators, I would be very surprised if a good portion of these people were not locals who stopped to watch. I think the thing that impressed me the most about the weekend, though, were the competitors. With how much the sport has grown over the last year, there were so many new faces at this year’s event, and everyone that I interacted with were competitive as hell. If you are unfamiliar to strongman, unlike a large majority of other sports, most competitors are actually very supportive of each other. Even individuals who are neck and neck for points will often cheer and push each other simply for the benefit of that person. To me it just adds to the experience of strongman. Even though the venue was able to block away a lot of the sun and heat that was expected for Saturday’s competition, it was still hot as hell. I would argue strong men and women to be some of the toughest athletes around. I can’t even count how many competitors I saw pass out from pushing themselves to the limit, and I’m convinced that strongman is one of the few sports in which an athlete will pass out and then attempt to finish the event. There was one particular competitor whom I’m fairly certain probably passed out on every event. Having said all of that, I’m happy that (from what I could tell) no one was seriously injured or had to pull out of the competition due to injury. To all the competitors from Saturday, you made such an awesome impression on me and were all great representatives of the sport for those spectating who had never seen a competition before.

It was great to get back to my strongman roots and see the many friends that I’ve made over the years in the sport compete and perform. I do wish that I could have had more time to visit with those I hadn’t seen for awhile, (specifically the entire Team Anvil Gym who performed VERY well) but it is part of the job. I look forward to next June and hope to see the sport continue to grow.