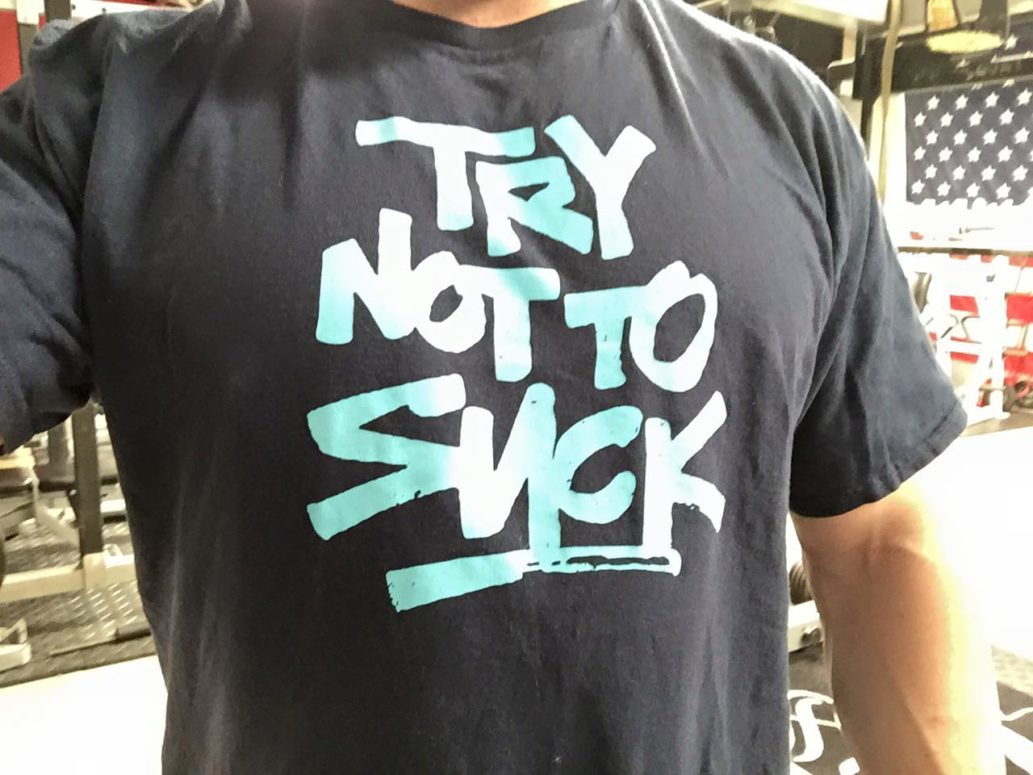 I was talking with a member today who was curious about competing in powerlifting for the first time and what some solid numbers for him to put up would be. The conversation contained some good tidbits that I think many of you may find helpful and/or humorous.

-There are standards that exist in all areas of life but what’s most important is that you have your own standards for yourself and hold yourself to those standards. The question posed was “What are some solid numbers to shoot for” to which I responded: a double bodyweight squat and deadlift and a bodyweight and a quarter to a bodyweight and a half bench. These are numbers I think the vast majority of adult males should be able to accomplish within the first couple years of training (females as well although I would adjust the bench down to a bodyweight bench) without having to do anything too crazy. These are the numbers that show you are strong, fit, and obviously train. They won’t win you any world records but if that’s not your goal then who cares. Something to shoot for if you’re trying to come up with some goals.

-Likewise, everyone should have some goal in mind when training. Even if your goal is just to be healthy, having some solid, objective goals you can work towards makes a big difference. This could be 10 pushups, 1 pull-up, running a mile without a break or being able to fit into smaller pants. We’re all going into the grave one day so better set some standards for how you want to live before that happens. I hate to think that the vast majority of people are on a slow decline from age 25 till death, watching their health and fitness slowly pass away with short bursts of half hearted mitigation in between. Who wants that on their tombstone? “Here lies so and so, they lived without standards”

-Just because something works doesn’t mean it’s the best way, safe, or even inherently good. Rape can be an effective form of impregnation but I seriously doubt anyone believes that makes it “good” or even a viable option. I can’t count how many times I’ve heard people argue ridiculous training or nutrition habits and methods because “well hey, it works so I just do it”. Well hey, you’re just dumb.

-In fitness, there is an inner circle that contains 10% of the people and 90% of the knowledge and an outer circle that contains 90% of the people and 10% of the knowledge. When someone in the outer circle begins to learn something, they compare themselves to other people in the outer circle and comparatively they are extremely knowledgeable. This can lead to them having a skewed view of where they stand between the two circles of fitness. If you only have a limited amount of knowledge, then you aren’t quite aware of all the things that you don’t know. This can lead you to believing you know a significant amount. Unfortunately, for many people in the fitness realm (especially those with experience) this can be a major limiting factor in their total progress. They believe they know so much that they have no need to continue to learn from outside sources. However, if they are open they’ll slowly slip into the inner circle and have an epiphany moment in which they realize how much they don’t know. To be truthful, they will continue to have these moments as I continue to have them. A couple instances in which this happened to me was the first time I heard of Westside Barbell. Their strength standards to get an invite to train there were at a 1000 lb squat, 600 lb bench, 800 lb deadlift, and/or a 2000 lb total. This blew my mind as I didn’t know these types of numbers were even possible, much less the standards to join a gym! Learning this lead me to seek out more information and was what initially started be down the path that has brought me where I am today. Another instance was during some PT clinic hours in which the head PT asked me how many muscles attached to the scapula. As I fumbled and bumbled trying to think of the correct answer, he told me that if I couldn’t name the muscles that attach to the scapula within 3 of the correct answer, then I had no reason ever working in the field. That was another eye opener. This also goes back to the topic of standards from before. As I was made aware of what more potential existed, I was forced to raise my current level of knowledge and ability to hold myself within the standards I had set for myself.