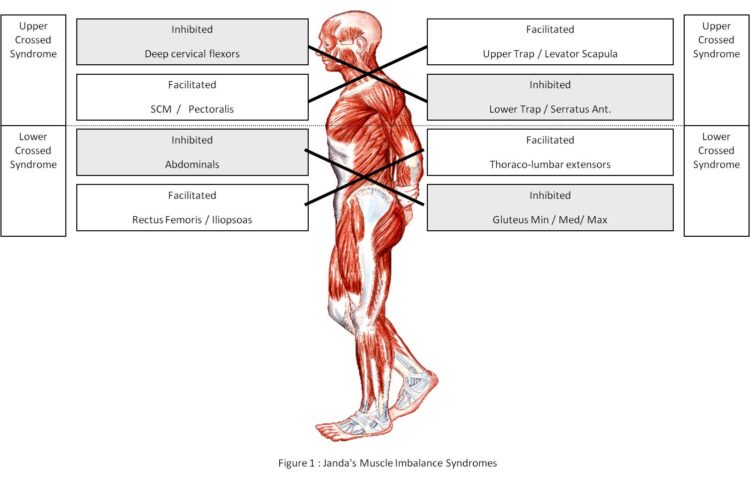 In practice (private or team sports), there are a wide spectrum of injuries that can occur in many different places. Today’s world of information undoubtably arms patients with more knowledge of their body. It is not uncommon for a patient to beat me to the punch and ask whether or not their problem is a compensation for something else. I find this to be a good thing as the patient is aware that there is a possibility that this is occurring and that it may be more complicated than just having pain (right here) or that it may be relative to a previous condition or trauma they had experienced. When dealing with a problem, the single best indicator for a positive outcome is identifying WHY or HOW said problem occurred (AKA, the cause). I know this seems like kind of a no-brainer, “Wow, Doc, that was a really riveting piece you wrote that an injury gets better when you find out whats wrong,” but let’s hold back on the sarcastic praise until the end. Some of the most simple concepts are the most important and I want to use this framework to set a good foundation to build on moving forward. So here is why that opening statement is so important.

The foundation I would like to build for future discussion and expansion are based on the work of Dr. Vladimir Janda (Pronounced with a soft J – think jogging). He is most famous for his identification of upper and lower-crossed syndrome, but much of his work is overlooked and less studied. His work was revolutionary for his time and provides an understanding for some of the faults of western medicine, and provides an insight in understanding compensation. According to Janda, there are two main schools of thought when it comes to pathology of the neuromusculoskeletal system. This is the system which concerns all muscles, tendons, bones, etc and the nervous system which controls it. These two schools of thought are structural and functional. A structural school of thought concerns lesions that can be assessed with orthopedic testing and visualized on imaging (X-Ray, MRI, CT  Scan, etc). A functional injury is described as “an impairment in the ability of a structure or physiological system to perform its job.” This is our first introduction to a compensation. When a structure (muscle, ligament, joint, etc.) is unable to perform its job, it will adapt a new pattern, movement, or action which is inferior to normal. This new adaptation MAY OR MAY NOT result in immediate pain. That statement cannot be stressed enough as all too often, the focus on personal health is “if I don’t have pain, then I don’t have a problem.” If there is a functional cause, it is much more likely for the compensation from normal to develop and progress without pain until these compensations cause enough damage and stress to overcome the body’s pain threshold.

So let’s expand on this with two injury examples. First is a common football injury. A running back attempts an open field cut to the left, planting his outside right foot. During the cut, his foot catches and his knee hyperextends and rotates. He hears a pop and drops to the turf in pain. Orthopaedic tests are performed on the field and indicate a suspected ACL tear. The tear is confirmed with an MRI that evening. This lesion is a structural lesion. Orthopaedic testing and imaging modalities are able to identify the damaged structure. There is a very well defined and proven treatment for this condition. This type of condition is very well managed by most medical professionals.

The second example is a weight lifter. She has been lifting for three years, has competed in bodybuilding, and is now training for her first powerlifting meet. She started having pain in the front of her right knee in the middle of her training cycle and is now having pain in her low back that favors the right side when she squats. She decides to see an orthopaedic surgeon. There are no orthopeadic tests that can provoke her complaint. Her x-rays and MRI are negative and show no sign of STRUCTURAL damage to the knee. No trauma is involved in this injury, and the subject does not recall a certain action that began this pain. There is no indicator as to WHY the pain is occurring besides the fact that it is occurring in the right knee and low back. She is diagnosed with patellar tendinitis and a strain in her low back. She is given prescription pain medication and told to back off on squatting.

This lesion is likely a functional lesion, and presents only in specific situations such as squatting. In a condition like this, without being able to visually identify which structure is injured, a common practice is to slap a generic diagnosis such as tendinitis, strain, or sprain and to throw medication at it based on the presentation of pain as it is not a surgical case. Let’s imagine this woman had begun weight lifting three years ago on her own. She was not taught proper mechanics and developed an improper squat form with a weak posterior chain. During this time, she saw moderate improvements (as most beginners do), began to get passionate about lifting, and was also told by a trainer at her gym that she should do a bodybuilding show. She hires the trainer who puts her on a program but neglects to correct her form. Now three years later when she begins to increase weight loads on her squat in preparation for a powerlifting meet, she begins to increase the abnormal stress in her joints caused by improper form and compensation of motor patterns. She is quad dominant and unable to activate her posterior chain and begins to have knee pain. This pain is tolerable but causes her to offload the knee and compensate even more by utilizing the lateral stabilizers of her spine. A few weeks later she begins to develop back pain. Looking at this lesion in a functional school of thought, the pain may allow for a starting point with the understanding that there are likely underlying factors that occurred to develop this pain, especially when it is non-traumatic. A structural school of thought cannot comprehend this sequence of events, as it is focused on where the pain is and visualizing a damaged structure or finding a positive orthopaedic test to single out the lesion.

SO… what should we take away from this?

1) Many pain conditions are the result of functional lesions and compensatory patterns. These common patterns have been well established in Dr. Janda’s work and are grouped into what is known as lower and upper-crossed syndrome.

A vast majority of patients that I see will fall into this category and type of lesion. Functional lesions are much more common than structural lesions. This is ESPECIALLY the case if they are chronic in nature and do not involve a single incident of trauma (although there are exceptions to this).

2) IF not properly treated, these conditions will not improve.

If a functional lesion exists that is not properly managed, the conditions will not improve and is likely to cause worse injury down the road. Pharmaceutical or surgical intervention for a functional lesion leads to poor outcomes. This has been shown in cases like patellofemoral pain, plantar fasciitis, and tendinitis to name a few.

3) Functional lesions/compensatory patterns develop over time due to repetitive stress.

Just as in the example, the development of a functional lesion takes time under stress. The basis of the upper and lower-crossed syndromes are rooted in the fact that the body is predisposed to adapt in a predictable pattern due to the repetitive stresses in our jobs, daily activities, and social life.

-Stay tuned for part II, as we will discuss how a functional lesion or compensation occurs.