As I’ve discussed in other blogs, I came from a relatively active background. I started playing softball at age 10 and, since I was by far the smallest on the team, I was best suited to strap on a catcher’s mask and squat behind home plate.  My size worked for me here, however every time I went to bat, I would watch the entire opposing team move forward to field the ball. It was disheartening to say the least but I wasn’t strong so even if I made contact, the ball was surely not going far.

Since batting wasn’t my strong suit, I decided I’d at least be the best Catcher I could be. I practiced popping up out of position as quickly as possible, and since a caught pop-up foul ball in slow pitch softball is an automatic out, I worked hard to never let one drop.

Chanting at the batter to throw her concentration and becoming fluid at flipping the catchers mask off and bounding out, kept most umpires on their toes and unable to get out of my way quickly enough! My coach recognized my strengths and weakness, and helped me focus where I could be the best.
The first year I played, I was MVP.

I played off and on for next 10+ years playing women’s and a couple of co-ed slow pitch softball teams. I played almost every position (minus pitcher) but eventually settled in as a Short Stop.  My batting got better and and I even knocked a few home runs as an adult player. Softball was my first sport and I always loved it best. 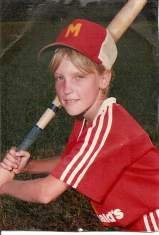 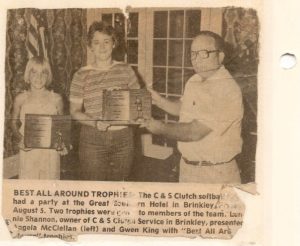 My Sophomore year of high school we got new football and track & field coaches. The coaches were younger than previous years’ coaches and I thought they were cute. Based on this criteria alone, I decided to try out for track. Having no idea what I might be good at (if anything) I relied on the coaches training and direction. Turns out, I was good at distance running so my event became the 2 mile run.

I had an awesome coach who taught me, first, how to believe in my abilities and second, how to be uncomfortable. He saw great talent in me and he helped me achieve my best. I ran for 2 years and during my junior year had colleges scouting me for their Cross Country programs. The summer before my Senior year, my coach got transferred to a different school. Because of this, I chose not to run my Senior year.

Although my track career only lasted 2 years, I broke our school record in the 2 mile run, and I placed 8th in the state of Arkansas. My coach’s support meant a lot to me and since I didn’t have a support system outside of him,  I just didn’t have it in me to run my senior year without his coaching.  Who knows what could have happened if I’d kept running, but thats another story for a different day.

When I started CrossFit (December of 2008) the coach I started with was quite different than any coach I’d had previously. Without saying disparaging things, I’ll just give him the gratitude of introducing CrossFit to me. After falling in love with CrossFit, I started coaching six months later. Although I hadn’t fully developed myself as a CrossFitter before I started to coach, I was very passionate about it and knew I could grow and learn while teaching.

Throughout my journey, I’ve had some coaching but none consistently. When I became a gym owner, and the workouts became fewer and farther in between, I had even less coaching. I had thought off and on about having someone program for me but put it off since I didn’t really know anyone who could do it or didn’t think it necessary since I had no ‘real’ goals. I also had so many other people I needed to focus on.

Like many of you all, I have many weaknesses and have a tendency to cherry pick workouts. I am not like Rich Froning, who beat the hell out of his weakness so he could be the CrossFit Games champion for four years! Alas, I am human so I avoid things I’m not good at.

The CrossFit Open is always a great time to check ourselves to see where we are. While I can do most things now, I still have a few check marks to get and I of course would like to be better at everything CrossFit!  So, once the Open was nearing an end, I asked around to see who might be a good coach for me to do remote programming with. Upon Annie Gunshow’s recommendation, I started using someone she went to college with. His name is Nate and he is a CrossFit coach in Denver.  He sends me weekly programming and I send him feedback at the end of the week. We are a pretty good match.

Now, I am forced to work on my weaknesses and while I still could cherry pick…I won’t, because what would be the point? Having a coach, even remotely, helps tremendously with accountability!! I want to do my best and not disappoint, be a weak ass, or be lazy.

I’m in my 4th week of programming and I’ve already pushed myself further than I have before, and I am learning many new things….which is also another great reason for coaches to have a coach. We get exposed to so much more and then can pass on the knowledge to our athletes.

While I’m personally in my 8th year of CrossFit training, I feel like I still have so much untapped ability and haven’t ‘peaked’ so to speak.  Now, I am realistic and I don’t anticipate ever going to the Games as anything other than a spectator, but I do think a great coach can help you find and bring out the absolute best in yourself, and isn’t that what we all want?