My Journey with Nutrition

I grew up a skinny kid. I was shorter than my classmates and I was, by far, the tiniest. I could eat anything I wanted and never gain an ounce. Being small was great when it came to distance running or filling the catcher position for my softball team. My friends fondly referred to me as “Shorty”, “Short Stuff”, and the ever-popular, “Pygmy”. For me, a growth spurt didn’t occur until after graduation.

As I aged, I never considered myself as having a weight ‘problem’, but after having each of my children, I always managed to keep an extra pound or three.  When I started CrossFit I adopted the Paleo diet, “Eat meat and vegetables, nuts and seeds, some fruit, little starch and no sugar”. I was able to drop weight, added muscle, and found my abs at about 40 years old. This worked….until it didn’t.

When I opened my gym in 2012, my level of stress increased. My meals were still “healthy” but higher in fat, and usually accompanied by delicious craft beer or vodka (my personal favorite beverage). In 2014, add in a thyroid disorder with hormone imbalances and the scale got ugly.

Society would have you believe that when women reach a certain age we should, in essence, settle in with our bodies and accept ourselves with a little extra weight. OBVIOUSLY, “women over 40 are less active”, “metabolism slows”, and we should “eat more fats because they are good for you”, blah blah blah. We’ve all heard it and I almost started accepting it. Now, there are physiological changes as the body ages and we all know that.  Genetics do play a factor in how we age as well, but let’s not get too sciency here and overthink things. I was getting heavier because I was overeating and drinking too much. My thyroid disorder made a serious impact but I can’t blame it entirely. I was mismanaging myself while trying to take care of everyone else. I needed to make a change but didn’t know how.

The day before my birthday, I hired a nutrition coach I intentionally created my start date at that time so I could avoid birthday cake. Ahhh, cake! It’s one of those foods I can resist…unless I take a bite. After that first bite, I’m like an episode of Man Vs Food when they put a 5-pound burger in front of someone with a timer counting down to see if total domination can occur.  I always win with cake. Thus the need for nutritional coaching!

So my journey began. Macros here, macros there. Reduce my fat intake (it was a lot), increase my protein, increase my carbs, learn to plan better, don’t go out with drinking friends. Admittedly, I didn’t do very well in the beginning and I didn’t stop drinking either. My progress was very slow.

Currently, I’m in the middle of my second 12-week cycle and I have certainly gotten a better handle on things! I’ve lost a total of 15 pounds, 12 inches, 2 sizes, and probably a few drinking friends. Focusing on my nutrition over the summer also helped me manage the stress and transition of selling my gym. 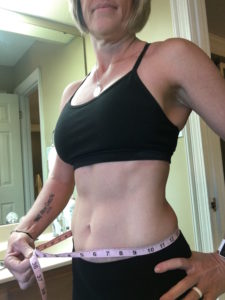 Let’s be honest, taking account of everything we eat can often be challenging, however, the positive results far outweigh the time in calculations and preparations. The changes I have experienced have not only occurred on the scale and with a tape measure but also in how I feel about my body as a 40+-year-old woman.  How I feel during workouts and recovering from workouts has also improved tremendously! I haven’t reached my goals quite yet, so the journey continues, however, I think I’m off to a good start!

Don’t get me wrong, I love food trucks, fried chicken, and vodka, but if I’m going to indulge I try to plan for it and decide if it’s REALLY worth it!