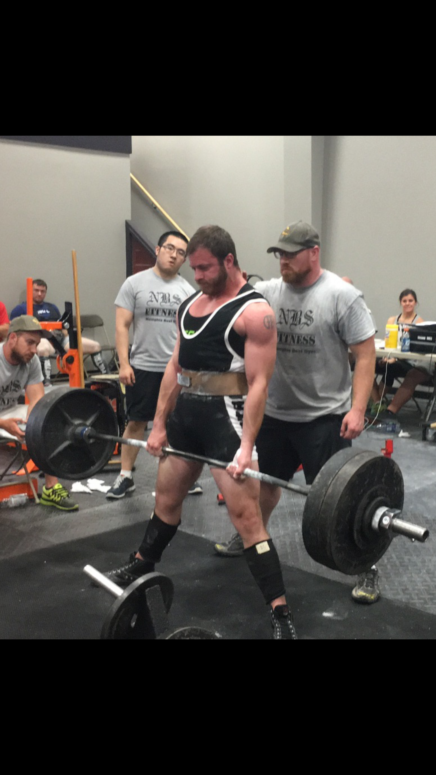 Okay, Picking up where we left off, which was the conclusion of squats and now we’re heading into bench press. For me, bench press really didn’t seem like anything too special. Although, my opener and my second attempt were both meet pr’s, I just didn’t feel too amped up around this time. The meet and the flights were starting to drag, and I felt like I was beginning to tire. During bench, I was giving lift offs to my girlfriend, as well as another teammate who was also giving me a lift because that’s how we were doing it in our training cycle, and that’s what we felt comfortable with. I would find myself struggling to pay close attention to make sure that I wasn’t missing giving anyone a lift, and also that I didn’t miss my turn to warm up for bench. I would try my best to listen for names being called out over the mic over the loud music. My female client was the first to go hitting her opener with ease. She hit her second attempt, and ended up missing her 3rd because the bar was dropped a bit too low on her chest and she just got out of groove. I know she had it in her though because she hit it in training. My girlfriend opened with 185 making it look easy, and jumped to 200 for her second. Now she hit this plenty of times in training, but I will admit that the jump made me a little nervous. She ended up hitting that as well, but just didn’t have enough left in the tank to hit her 3rd. Its kinda funny because that’s how it went for all of us. I ended up missing my third, which was my heaviest weight I hit in training at 295, but it just wasn’t there on meet day. My male client had things go exactly the same for him, hitting an opener at 315 easily. Smoked his 2nd attempt, and just didn’t have enough to make his third. At this point you could pretty much say we were all having the same meet. I’m sure we wanted more, but all in all were probably okay. one thing to remember is that things can always be worse. The morning had slipped into the afternoon, and the afternoon had slipped into the evening and it was now time for deathlifts. For me, now was the time to start getting amped! I’m not sure if it works for everyone, but I can’t seem to rip a barbell off the ground if I’m calm, cool, and collected. I think by this time everyone was ready to end the meet and go home. Fortunately for me, deadlifts don’t require and knee wrapping, or lift offs, so for the most part everyone was on their own at this point. The first flight went, which included my female client who ended up going 3 for 3 on her deadlifts pulling a nice 315 on her 3rd attempt. Up next was my girlfriend who had pretty smooth 1st and second attempts. From there, she wasn’t sure what to do for her third. She only needed 15 more lbs to hit an elite total for her weight class. In order for her to get this, she needed to pull 350. She asked our head coach for his opinion and he said to go for it, which I think was a good call too, I mean why not. She ended up getting it off the ground, but got called for a hitch. I spoke with her afterwards and she knew that she had hitched it, she said she could feel exactly when it happened. She didn’t blame the judges one bit on their calling. Next up was my male client. Although he was in the second flight, our 1st, 2nd, and 3rd attempts were pretty much identical. He ended up going 2 for 3 hitting his 455 opener with ease, but just didn’t have enough left to hit his 500 3rd. He has hit that in training,but just wasn’t there on meet day. Finally it was my turn! One of my fellow teammates, who was also a judge at this meet was there from my first attempt, all the way to my last in my ear giving me the encouragement that I needed. He could see that I was starting to drag and that I needed some amping up if I was going to pull my shit together. I puled my opener pretty easy, second attempt went descent as well. Now, I had set my third which was 500. I had not hit this number yet in training, but I had hit 495, so I knew it wasn’t completely out of reach. But I had also missed it twice in training. I had my entire team behind me supporting me, when I happroached the bar it felt as if everyone in the gym was cheering for me. I grabbed the bar and started to pull, a smile gradually started to fill my face! It actually felt a bit easier than I thought it would. I made locked it out, and returned it to the ground. I can’t even begin to describe the amount of joy that fell over me! One of the greatest feelings in the world! Best lifts and totals for everyone:

I just want to take a moment to say how proud I am of all of them, everybody gave it their best and that’s all you can ask for. It was definitely a learning experience for me, and this is something that I will remember for the rest of my life! How could I ever forget the first time a became a competitor and a coach! I can’t wait to see what the future holds for all of us, there is so much more to come.