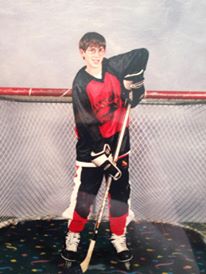 Earlier today I was joking with a member about some of the silly things I did when I was a beginner and I thought all of you would appreciate some of these stories as well. I started training the summer between 7th and 8th grade. Around this time my testosterone levels were starting to increase and I realized that being skinny and weak wasn’t something I wanted to participate in much longer. My dad had some concrete filled dumbbells and a pullup bar upstairs and, as I recall, I started doing bodyweight exercises and lifting those ten pound concrete dumbbells.

Eventually my dad bought a bench press that had a pulldown and leg extension/curl attached to it. We got a standard barbell weight set and collars that threaded onto the ended of the barbell. I was psyched! One day while doing pulldowns, I broke the weld between the bench and the pulldown upright. I recall everything happening in slow motion as the entire machine shifted and bent and sandwiched me between the bench pad and the upright. I thought my Dad would surely be pissed that I broke the machine but actually he was pretty tickled that I was strong enough to do it.

Exercise Machine #2 and Oiling Myself Up For Training

After breaking the first machine we had, my parents got another, heavier duty one for me to use. Like many beginners, I looked up to the bodybuilding stars featured in flex magazine at the time. In fact, I used to cut out different pictures of my heroes and tape them to the walls in the room I trained in along with my training plan. I also notice at the time that whenever a bodybuilder was in the magazine they were super tan and usually glistening with oil. I thought this was how bodybuilders trained so I got some fake tan and put it on before my training session. After sliding all over the place while trying to bench press, I quickly realized this was a bad idea. 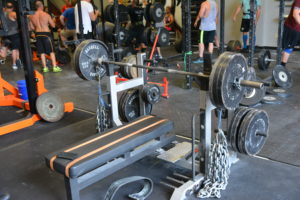 Eventually I graduated from being a beginner at my home gym to being a beginner at a commercial gym. Around my sophomore year of high school I was training in a commercial gym and was bench pressing 135 when it got stuck on my chest. I had to ask the female weight floor attendant to help get it off my chest for me. She was a pretty blonde girl about 5 years older than me so I was naturally embarrassed beyond belief.  Funny side story: About two years ago she actually contacted me for personal tra
ining, not knowing who I was. I had forgotten her name but when she showed up for her consultation my eyes shot open and I said “Hey! Do you remember rescuing me from the bench press in high school?” 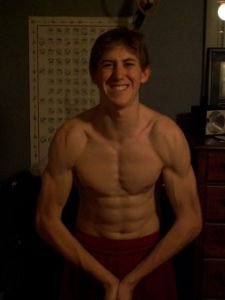 Clothes and My First Time Shaving

If you know me, you know I am the hairiest man alive. I am covered in hair from head to toe with very little spaces in between. Well, as far as I could tell, none of the bodybuilders in Flex magazine had any hair so I needed to start shaving. The first time I did it, I spent about an hour in the bathroom trying to get every nook and cranny. I can only imagine what my parents thought. About 2 days later my skin broke out in razor rash. I looked like I had chicken pox. Around this time I also decided I needed to start dressing like a bodybuilder so I convinced my mom to help me upgrade my wardrobe with some cutoff sweatshirts and string tank tops from bodybuilding.com. I’m sure I got some funny looks walking around the gym at 6’2″ 150 lbs with my shaved legs and string tank on.

The first supplements I took when I was a beginner were nitro tech (protein) and cell tech (creatine). I recall the nitro tech being some of the most horrible tasting powder I could have ever imagined and it didn’t dissolve. For some reason I thought the best time to drink it was right after lunch. So I would be choking down this gross, lumpy protein powder that tasted like ass and gagging because my stomach was still full from lunch. The cell tech tasted slightly better but if you ever took creatine back when it first came out, you know about the horrible stomach pain that came with it. I’m convinced it was actually just a laxative. About 30 minutes after drinking it, everything in your system was coming out in liquid form. I thought that made it extra hardcore to drink.

While not a complete list of embarrassing memories, it’s plenty to reminisce on and give you all a good laugh. As much as I like to think I’ve changed since then, I’m sure I’ll back on these days and still think most everything I did was pretty ridiculous and funny. We were all a beginner at one time so don’t let that stop you from starting your journey. What are some of your beginner stories? Share in the comments below.