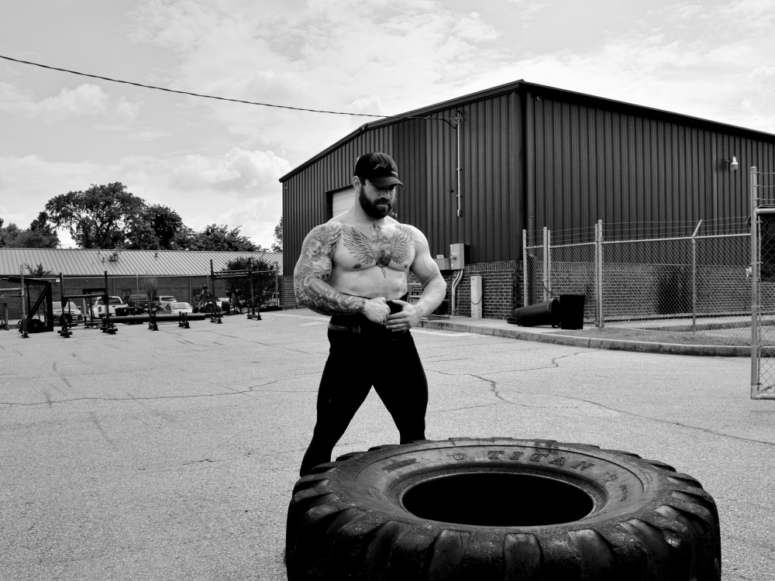 Is strongman training appropriate for everyone?
1. Yes, assuming they are healthy enough to do any form of physical training.

What are the benefits of strongman training compared to more traditional training styles like powerlifting or bodybuilding?
1. Strongman training involves a few fundamental human movement patterns: the overhead press, the deadlift, weighted carries, and loading. Focusing your training on these movement patterns is considered more “functional” than traditional styles of training because of how they stress the core musculature and their application to everyday life. For example, the amount of force a person can generate while bench pressing will only translate to about 1/3 of what the lifter can generate once you remove the bench, stand them up, and have them apply force horizontally. Meanwhile, a lifter’s ability to generate force vertically when compared to an overhead press will not change because the lift is already performed standing and does not require any additional support. This has huge applications for athletes like football players and wrestlers whose traditional barbell training involves plenty of bench pressing but would be better served by focusing primarily on the overhead press instead.
2. The main muscle groups utilized as either primary movers or stabilizers in strongman are typically the muscles that most people need more of to develop a more balanced physique and ultimately get stronger: upper back, lats, shoulders, glutes, hamstrings, and the entire trunk. Go to any strongman contest or powerlifting meet and look at the athletes that are moving the most weight. They often have an abundance of muscle on their posterior chains, core, and shoulders.
3. Another benefit to strongman training is novelty; simply trying something new is enough of a stimulus to produce some decent results in the gym. Farmers carries, tire flips, stone loading, and log pressing are all such foreign movements to most gym goers that they won’t need to be trained heavy to get a lot out of them. The novelty of these movements gives them a huge return on investment. 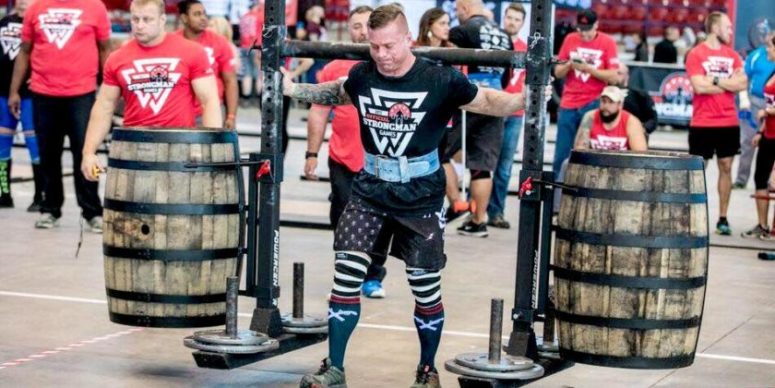 How could I implement strongman training into my current regimen?
1. Recommendation for the offseason bodybuilder:
a. Using a strongman event as a “finisher” after training a similar movement or body part. For example, finishing a shoulder workout with log clean and press for reps, doing stone loading at the end of a back workout, or doing a yoke carry and sled drag medley at the end of a leg session. This strategy is the safest and most user friendly because it will allow the bodybuilder to get in all the normal volume they need to stimulate the muscle groups they are working that day, and they can attack the strongman finisher with much less weight than they’d be capable of doing if they were fresh.
2. Recommendation for the offseason powerlifter or athlete:
a. Using a strongman event as a primary assistance movement immediately following the main lift for the day. Again, I would recommend pairing the strongman training with like movements: squatting followed by yoke carries, stone loading following deadlifts, log clean and press after benching etc. Pairing like movements will help reinforce the primary motor pattern you are working that day and will provide ample metabolic stimulus, when planned appropriately, to stimulate as much muscle growth as possible. For example, let us take an offseason lifter and implement yoke carries into their plan after squatting. The lifter works up to 3×5 at 455 on safety squat bar squats with no belt and immediately follows that up with beltless yoke carries for 50ft down and back with 600lbs before finishing the remainder of his/her assistance work. Consider the amount of time under tension the core musculature, upper back, and hips will get carrying a 600lb yoke for three 20-30 seconds sets (estimated time it would take a novice to slowly carry a yoke for 100ft with a drop at 50). The amount of work in this example would not easily be replicated without doing specific assistance exercises for the core, upper back, and hip extensors respectively. The work economy this stimulus provides as a primary assistance movement will allow the lifter ample time to use the remainder of the session to focus on a particularly lagging muscle group or portion of a lift.
b. Another strategy for the offseason powerlifter or athlete will be using the same “finisher” strategy that is recommended for the bodybuilders.
c. The third option to implement strongman training as an offseason powerlifter or athlete would be using weighted carries and light, higher rep loading events to work on general physical preparedness (GPP). This could be implemented as extra GPP workouts done between main sessions in the week or once a week as a more traditional strongman event day. The caveat to doing it once a week, however, would be that an offseason powerlifter needs to keep in mind that he/she is using strongman training as a medium to improve his/her conditioning, and not that they are dual sport athletes competing in strongman and powerlifting. Keeping the weights and work intervals consistent with the desired stimulus will allow the offseason powerlifter to reap the benefits of strongman without showing up to the gym for week 1 of meet prep with a bunch of nagging aches and pains from going too hard on strongman event work.
3. Recommendation for the general fitness enthusiast or crossfitter:
a. Use strongman training in the above “finisher” examples to end a workout with a similarly paired strongman event. For the crossfitter, this could entail working up to a top set on barbell clean and jerks followed by two log clean and presses every minute on the minute (EMOM) for 10 minutes, or doing Grace with a log instead of a barbell.
b. Use strongman training as a variation of high intensity interval training (HIIT). This is essentially the exact same recommendation as the GPP example for the offseason powerlifter or athlete. Basically, the participant will use a strongman event, or multiple events, for a specified period of work followed by rest. For example, doing farmers carries for 50ft followed by five tire flips and 60 seconds of rest for 20 minutes. This can be a fun way for most people to change things up with their own training to keep their workouts interesting.

In conclusion, strongman can unequivocally be used by anyone in the gym who is healthy enough to exercise and wants to gain strength and add muscle. Just because strongman in pop culture is most often associated with professional strongmen lifting 360lb logs over their heads for reps or carrying 1100lb yokes for 50ft in under 10 seconds, doesn’t mean the style of training can’t or shouldn’t be used by everyone. Not everyone can compete in World’s Strongest Man, but anyone stands to gain something from using the multi-joint, multi-planar movements that strongman revolves around.