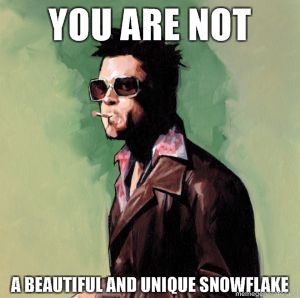 Failure is inevitable. Failure is life. Show me someone who doesn’t have a bag full of failures that they can pull from and I will show you someone who hasn’t done anything worth a damn. Failure is an opportunity to learn from your mistakes, to do it better the next time. Failing is vital to winning. And that is the distinction between failing and losing. Losing is a finished state, there is no coming back from it. If you fail to convert on third down in a football game, you can learn and adjust to increase your chances of success the next time you need to convert on third down. But if you lose, the game is over.

Everyone Has What it Takes, Some People Just Don’t Use It

My time in the fitness world has allowed me to experience a lot of failure, a large amount my own, some from clients, the rest from people I know. And while failure is an opportunity to learn, for some, they let it become an opportunity to lose, or worse…quit. I don’t know what causes this mentality. Is it biological, something that is inherent in a person’s DNA, something they have no control over? Is it environmental, where during their development they were rewarded for quitting instead of trying again, harder? I’m not sure what the answer is. However, I do know two things for a fact:

This is true up and down the spectrum of intensity. I recently interviewed a SEAL buddy of mine named JP Dinnell on my podcast (The Iron and Lead Podcast) and he said that despite the military’s best efforts to better prepare candidates for BUD/S training the only way to get more SEALs is to take more candidates. You can’t improve the drop out rate, some people are going to quit and some people aren’t. Period. On the other end of the spectrum, a minority of people are going to be able to succeed when they begin a new exercise regimen, try a new diet, or start a new years resolution and the large majority will not. Love it. Hate it. It is what it is.

Define Your Own Success

What you consider failure, what you consider winning or losing is up to you. For some, winning is giving up regular soda in place of diet soda, for others winning is hitting a new PR in the gym or on the road, and for others winning is completing an IronMan Triathlon or being in the record books. But like I stated above, regardless of what your goals, somewhere along the way you’re going to fail. And how you respond to that failure will ultimately determine whether or not you find your eventual success or throw in the towel. Understanding why you failed is the first step in learning from that failure and ensuring it won’t happen again. Here are the 4 reasons you will fail:

You Won’t Accept Self Responsibility

Truthfully, this is the foundation for pretty much this entire article. Every other reason points back to this simple statement: take responsibility for everything. If you haven’t read the book Extreme Ownership, you need to read it. The book is based around the principle of taking responsibility for every part of every situation. Missed a third attempt squat at a powerlifting meet because the judges were from another gym and they don’t like you? Wrong. You missed it because you didn’t squat it low enough to where they had no choice but to give you a white light. Didn’t get a promotion at your job because you don’t suck up to your boss? Wrong. You didn’t get the promotion because you failed to produce at a high enough level and develop quality work place relationships to a point in which there wasn’t any choice but to promote you. The biggest detriment to not taking responsibility is it leaves you with no course of action. How can you make any changes to ensure a more positive future outcome if none of the reasons for your current failure are your fault? You can’t. You just sit there and make indiscriminate passive aggressive Facebook posts and show the world how much of a loser you really are. It’s your fault, take responsibility and do something about it. 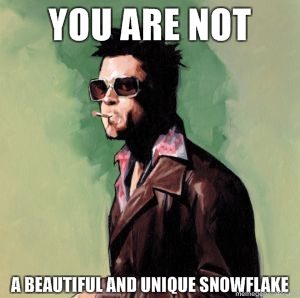 You Think You Are Special

Look, you are special. You are special in the sense that your parents were able to procreate, that somehow that one sperm and that one egg happened to go through meiosis, that you somehow survived birth, happened to be born into a time period with things like computers and air conditioning, and happened to (for most of you anyway) be born in the United States where you have the freedom to listen to rock and roll and eat apple pie. In that sense you are special, but in the sense of exercise and fitness, you’re not. Sure some people are born with different abilities and natural gifts but really, very few people lose because of their genetics and no one quits because of them. The thing is, if you just read that and thought to yourself “But David, I am one of those people”, then that’s the problem. In pretty much every single situation, regardless of what you are having to face, someone has been in a way worse situation, toughed it out and made it through successfully. That being said, if you find yourself in a tough situation, and want to start telling people how you’re “grinding”, make sure you’re not in that situation because of your own dumb ass decisions. Either way, don’t tell people you’re grinding. Just shut up and do the work. And if you think I’m being a hater, understand that haters don’t exist. No one has “haters”. If you think you do, you’re probably just a shitty person and people don’t like you. Be a better person and you won’t have haters. 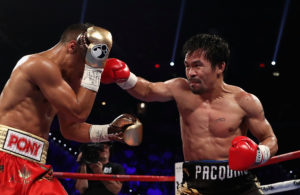 The easiest way to fail is to not give your all towards something. You don’t have to give 110%, you just need to give one hundred percent one hundred percent of the time. Sure, you still might not get the results you’re looking for but at least you know you didn’t leave any effort out on the table. One way I implement this is during my runs I always run out half the distance so no matter what I have to run back the other half. For you it may be cleansing your entire kitchen of crappy food or it may be putting all your toiletries at the gym so in order to brush your teeth and put on deodorant in the morning you have to go to the gym. Maybe that’s an extreme example but for a lot of people, they will take any easy out they can get. If there’s a chance to quit, they will. Don’t give yourself a chance. Get in the corner, take the punches, and fight your way out. 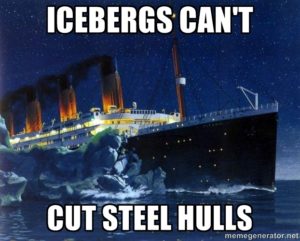 Your Ego is Too Big

This is a combination of not taking responsibility and thinking you’re special. Ego gets in the way of many great dreams. If the Titanic, the Hindenburg, or Blockbuster can teach us anything, it’s that thinking you are too big to fail is almost always going to guarantee failure. Be humble, ask for help, be open to new ideas and suggestions and don’t be married to your ways. Not only does this help you be more agile and able to react quickly but it helps you win over much needed teammates. Egos get bruised easily in the fitness industry where everyone’s self worth is wrapped up in how many followers and likes they get on the IG. Don’t let your pride be your blind spot.

This article was meant to be a little harsh and straight to the point. Hopefully it struck a few nerves in you, it definitely struck some within myself writing it. That’s a good thing. That means you have a chance to do something about. Be the small minority.